Slow Food Corvallis (SFC) serves as a bridge-builder and partner in food-related activities here and abroad. SFC is often the “yeast” that allows another program to grow. Below are some examples of programs we have supported over the years.

The Slow Food Ark of Taste is a catalog of foods that have been important in cultures around the world and that now are at risk of disappearing. This catalog includes fruits, vegetables, animal breeds, cheeses, sweets, cured meats, baked goods, and more.

The Ark was created to draw public attention to these foods and to their risk of extinction, and in this way to encourage people to take action to protect them—by buying and consuming Ark foods, by telling their stories and the stories of their producers, or, in the case of endangered wild species, by consuming less or none the food so that it may be preserved.

The Oregon Ark of Taste Committee works to identify endangered foods that are unique to our state or that have had special meaning to communities here. Two members of the Slow Food Corvallis board represent us on the statewide Ark committee, and one of them represents Oregon on the nationwide Ark committee. Our chapter nominated two of the Oregon products now on the Ark, the Kirk-Howe walnut and Scio kolace.

You can view the entire Ark of Taste catalog here.

We invite you to join us in the process of identifying more Oregon foods that belong on the Ark. Please feel free to share your ideas with us. 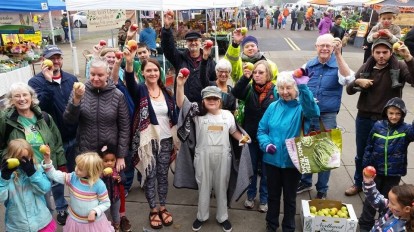 FOOD Day celebrations in Corvallis began as part of a national campaign to focus on fresh, healthy, local food as opposed to industrialized farms and overprocessed food. On the original national day of celebration, October 24. SFC and other local Corvallis food organizations banded together to produce an event that included speakers, workshops, and a buffet of local food. In recent years, including 2019, the event has been celebrated on a Saturday in September at the Corvallis Farmer’s Market, and has evolved to focus on children and food. Children up to age 12 are given market tokens worth $4 to spend on local market produce of their choosing. The token booth also has children’s activities usually with a face painting station and a tasting table of currently available fruits and/or vegetables. The highlight of the day is a public “apple crunch.” Apples are handed out to all comers, everyone gathers, and, on a countdown, we all take a big bite of our apples in communal appreciation of fresh, local food.

This project raises money  to increase the value of SNAP (Supplemental Nutrition Assistance Program) benefits at farmers’ markets in Oregon’s Linn and Benton counties, thereby benefiting both small farmers and low-income shoppers. SFC is a sponsor of a “dine out” program that supports Fresh & Local First.

Tasting Tables: SFC supported CEC’s very first tasting table, which gave elementary school students the opportunity to taste a seasonally appropriate produce item from a local farm. That first tasting table has blossomed into a nine-month program that reaches sixteen Corvallis-area schools. Information about the featured product is displayed at the school, and family newsletters with more information and a recipe are sent home.

Supper at SAGE: SFC was an organizer of the first Supper at SAGE, an event to raise money to support the Starker Arts Garden for Education, which provides gardening education and donates hundreds of pounds of food every year to other nonprofits. SFC also purchased a bike trailer for SAGE to use to deliver produce, and we have continued our financial support of the yearly event. 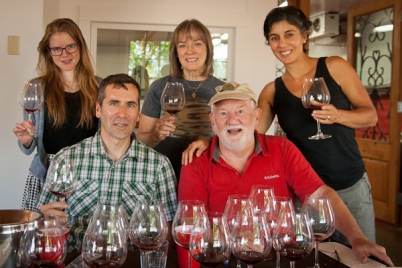 Don Oman, owner of Casa Bruno wine distributorship and cofounder of Slow Food Portland, decided to raise money for Slow Food by blending and selling an Oregon pinot noir wine and donating  the proceeds. SFC members met with Don and a couple of Slow Food Portland folks to create the final special blend from eleven of Oregon’s best wineries, all family-owned and committed to sustainable farming practices and the Slow Food ethos. SFC promoted the release of the 2014 SLOW Pinot by partnering with a distributor’s representative at a local store tasting as well as hosting a dinner, “Slow Pinot, Slow Plates,” where a tasty small-plate meal was paired with the wine. Proceeds from Slow Pinot enabled SFC to help eight delegates attend Terra Madre, the biannual gathering of Slow Food, in Italy.

Slow Food International initiated the project “1000 Gardens in Africa” at Terra Madre Day in 2010. Locally, Slow Food Corvallis focused on raising  funds to support the creation of a school or community garden in an African country. One such fundraising effort was our own local Terra Madre Day 2011 celebration, held at the Mary’s River Grange, where we served over 150 hot pan-African meals.

In 2013 we selected a collaborator in Ethiopia: Yenege Tesfa (“Hope for Tomorrow”) an organization which houses and educates orphans in the city of Gondar. Our $1100 donation was transferred in May 2013 to fund a garden at the Tayitu Girls’ Shelter, one of the four homes run by Yenege Tesfa.  In just a short four months the garden is up and running!

Check out the photos and read about the already successful Tayitu Girls’ Shelter garden.

In Uzhhorod, Ukraine, Corvallis’s sister city, the Corvallis Sister Cities Association Association has taken part in the Touch Project (Take One Ukrainian Child’s Hand). One of the associations’s endeavors is the Pavlovo Farm Home, where young girls who have aged out of the orphanage live and support themselves by raising crops and farm animals while learning useful skills. SFC collaborated with the association to purchase a cow to provide milk and cheese for the farm, as well as to start a breeding program to raise calves.